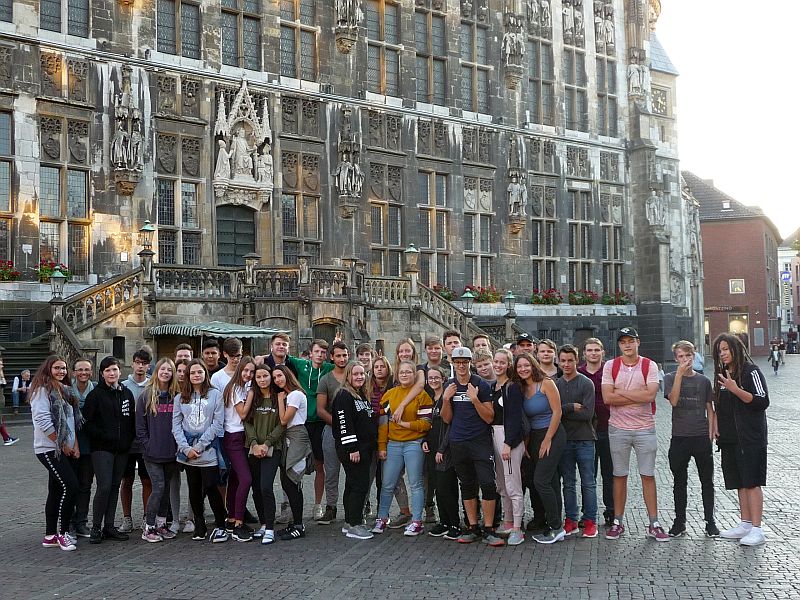 Class 10abM on a study trip to London

On Sunday we first met at our school and at 9pm we started the long bus drive to London. At Frankfurt the second bus driver left the bus and took the train home and our bus driver continued the journey. It was not easy to sleep in the bus, but after 2 o´clock in the morning it became very quiet in the bus. On Monday we went through Netherlands, Belgium and France. At Calais we had to show our passports at the border and the officers checked the bus. The bus got onto the ferry and we could walk around or sit in the restaurant for one and a half hours. Outside it was very windy and it was lots of fun to run on deck. We saw gulls and the White Cliffs of Dover. It was very exciting when the bus drove on left side of the street. It was the first time for our bus driver, but he did it really well. We stopped in Canterbury and visited the old city. Unfortunately the famous and very old Cathedral was very expensive and there were construction works. But we saw many lovely old houses and shops. Then we went to Bromley, a suburb in the South of London. There we met our host families and they took us to their home. Our first dinner and night in England!

On Tuesday our first day in London we met at the station at Bromley South. We took the train to Victory station and the underground to Westminster. There we went to the House of Parliament and the Elisabeth Tower (with the bell Big Ben). It was very busy and we took lots of photos. On the other side of the river Thames we could see the big London Eye. After that we visited the St. James Park and we fed lots of squirrels, ducks and geese. Then we saw the foot guards who protect the Buckingham Palace (we didn´t see the Queen). We walked to Trafalgar Square and saw Admiral Nelson on his column.

There we took for the first time one of the famous red London double-decker busses to St. Paul´s Cathedral, the second largest church of the world. We climbed many stairs up to the Whispering Gallery and the dom.  It was very exhausting, but we had a wonderful view over London city. We saw many skyscrapers e.g. the Shard (Scherbe)! After that we went over the Millennium Bridge (we know from Harry Potter).  By underground and with very tired feet we went to the Tower of London. There we enjoyed sitting on some benches. Some of us visited the Tower Bridge. It was a great day and we were very tired.

On Wednesday we took again the train to Victoria station and went by underground to the wax figures museum Madame Tussaud´s. There we met many famous and important people like movie characters, politicians, athletes or the royal family. We took lots of photos, watched a Marvel film in 4D, went through a Star Wars exhibition and a Historical London tour. After that we needed a rest in Regent Park. We had our lunch (we got a lunch packet from our guest families every day) and fed some birds. That was very funny! The park was one of the most beautiful sights because the park was full of roses. Then we took the bus to Camden Market, one of London´s famous street markets. That was a very busy and colourful place! After that we went to Oxford Street. But we had not much time for shopping because we wanted to visit Soho and Chinatown too. In the evening we had dinner in a pub and many of us ate Fish and Chips. After that we visited the Musical “Phantom of the Opera”. We really enjoyed the actors and the music. We liked it very much and we can say Wednesday was awesome! We want to visit another musical soon…

On Thursday morning we had to start early at 8 o´clock because we visited another UNESCO school, the Anglo European School in Ingatestone (Essex). It is a very big and creative school with about 1500 students. They learn a lot of foreign languages (for example Spanish, German, Mandarin, French, Italian) and some of us spent some time in a German lesson. We gave them some Otfried Preußler books in German and English and the German teacher was very happy about this present.  After that the headteacher Mr Barrs told us about their school. He spoke about the Europe idea and the troubles because of the Brexit. We visited the school in our traditional Bavarian Dirndl and Lederhosen and everybody was interested and happy to see us. They took photos and the headmaster loved the Bavarian flag. After the visit we changed our clothes in the bus and drove to the Southern coast. We went hiking at the Seven Sisters, white cliffs, and had a beautiful view of the sea. After many ups and downs we arrived at the beach. Some of us went into the water with their feet, some collected stones. The way home was very long, many of us slept a little bit, but we had a very beautiful day.

On Friday we did our Photo Rallye in London. First we started at Victoria station, where we splitted into groups. We got exercises from our teachers and we travelled through the city by ourselves. We had to take the bus, the underground and to walk and we had to take photos of every sight. At first we said “Goodbye” to Big Ben and London Eye with two photos. We also took a photo from Admiral Nelson on Trafalgar Square. At the National Gallery we met our teachers and had to find very famous pictures. The next stop was at King´s Cross Station where we took a photo of Harry Potter´s trolley. In South Kensington we looked for the dinosaur in the Natural History Museum, but there was only a blue whale. We visited Harrods which is a very expensive department store and Covent Garden. Our last stop was at St. Paul´s, but it was very difficult for all the groups because the Central Line was closed due to strike, which made us walk about 20 minutes. Other groups had to take the bus or another underground line. After that some of the students went to the Globe Theater and watched the play “The Winter´s tale” from W. Shakespeare. It was very difficult to understand the English text, but they acted very well and it was really awesome.

The other students went to the Natural History museum and visited the dinosaur exhibition. After that we could do some last shopping in Oxford Street or Camden Market. In the evening we had our last dinner at the host families. It was a fantastic day!

On Saturday morning we had to say goodbye to our host families who took us to the meeting point at Norman Park. We talked with them every evening about daily life, school, sports, TV etc. to practice our and English and learn about the English life. So we got to know each other quite well and some of us were a little bit sad to leave them.
We took the ferry again and at Aachen we had a break. The famous dome was closed, but we were allowed to go around the old city for about two hours. The bus trip during the night was very long and exhausting. So we were very happy to arrive at school in the early morning and everybody was looking forward to his or her bed at home.

We had a great time in London and enjoyed speaking English very much….